The humanitarian crisis in Yemen has led to several difficulties for the ordinary people- malnutrition, poverty, inaccessibility to medicines, education have become widespread. More than 2.9 children are malnourished and 29 million are dependent on aid composed of food coming from other states.

Yemen is one of the poorest countries in Arab. Its poverty has turned so widespread that mothers are compelled to skip their own meals in order to feed their children. It was many decades ago that most people in Yemen would eat a complete meal at the contemporary juncture women often sacrifice their food to feed their children. The perpetual environment of war in Yemen has compelled hundreds of people to have malnutrition related disorders and die in great numbers.

Around 2.9 million women and children in the country of Yemen are malnourished and 4, 00,000 children are fighting for their lives. 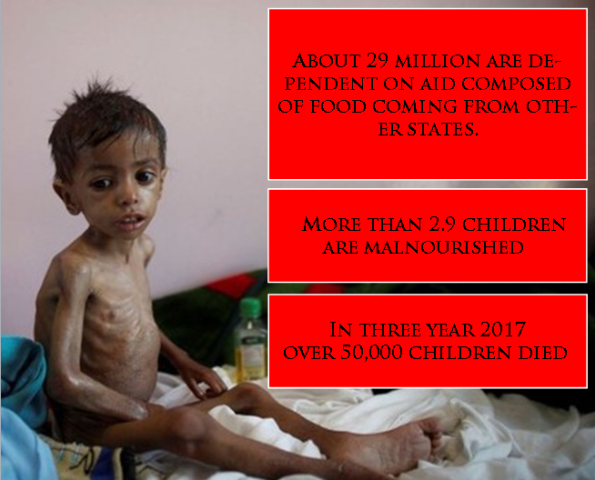 It is estimated that a great section of Yemen’s population are completely dependent on food aid that comes to them from outside because due to the perpetual war and geography of the land, adequate food is not produced and people find it difficult to afford the food available in markets.

About 8.4 million of its 29 million people depend completely on food aid and in the absence of this aid they would be compelled to starve. The number of people who depend on the food aid grew by a quarter over the past year.

Yemen may start facing widespread deaths from famine. In the present context it is a concern for many aid agencies who are finding it dificult to reach out to a great section of the population.

The war has has been continuing for the last three years old between Yemen’s Shia Houthi rebels who domiante the country’s north, and the Saudi-led coalition, armed and backed by the United States. The perpetual state of war lead to the suffering of ordinary people. In three year 2017 over 50,000 children died in Yemen due to malnutrition

Yemen is considered the world’s largest humanitarian emergency. The war has destructed schools, hospitals, clinics and roads in a manner that day to day functioning of the nation has entirely been damaged. In the present scenario Yemen is the poorest country in the Arab world.

Hospitals do not have medicines or specialists to look after the ill. Children cry but no tears come out of their eyes because their bodies are dehydrated.  There is malnutrition and ill health at such a great scale that ordinary people find it impossible to lead a decent life.  The aid that comes to them from other nations is not sufficient to enable everybody to eat and many people starve to death in the absence of concrete aid.

The crisis in Yemen is not limited to the people who inhabit the nation; it is a humanitarian concern that must be looked into urgently.