Home - OPINION - Why is the Government Afraid of Indian Students?
OPINION

Why is the Government Afraid of Indian Students?

Jamia Milia Islamia, TISS, IIT, JNU and students from many other universities across India are transcending religious/cultural/regional boundaries to unite their protests against the controversial CAA and NRC exercises. But why isn’t the BJP government engaging with them? 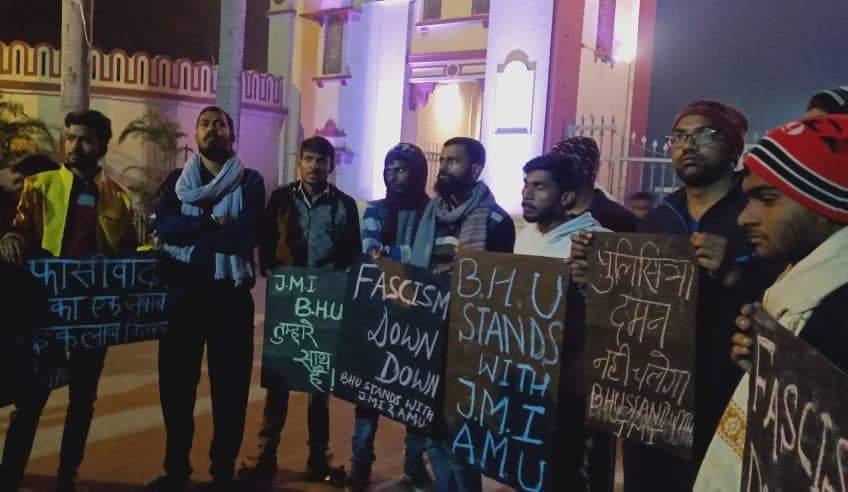 BHU students in solidarity with Jamia and AMU students

The CAA has encouraged a plethora of students and citizens protests across the length and breadth of the country. Those of us who vehemently critique the amendment to India’s citizenship law do so on various grounds, but the most important and frequently stated reason is that we see it as a violation of the basic structure of the Indian Constitution. The ongoing protests underline the point that such an amendment to India’s citizenship law is nothing but an onslaught on its pluralistic and secular fabric and an attack on the very delicate and fragile  socio-ethnic dynamics of a nation as diverse as India.

The anger and frustration of the protesting Indian students continue to be felt in protests and marches organised across various towns and cities of the country, even as the government continues to turn a deaf ear to their concerns and demands. But the kind of political mobilisation that students have been able to attain over the last week or so against the contentious CAA and NRC have made it increasingly impossible for the government to continue its denial and aloofness towards the voices of those critiquing the CAA and the NRC. It will not be long before the government would be compelled to speak up and launch a discussion with the agitating protestors and listen in to their concerns and demands.

After all we cannot deny India’s political history and the role played by the student community from time to time in not just presenting a strong opposition to the establishment but in also questioning the very premise on which it is based. The fact is that India has seen a long history of student movements and is witness to the fact that even mighty nation-states have not been able to retain and hold on to their political indifference towards the student community for very long.

Scholars such as Lloyd and Susanne Rudolph in their seminal work, In Pursuit of Lakshmi:The Political Economy of the Indian State have established how student movements have been intrinsic to India’s political economy and have played a vital role in defining the fortunes of the nation-state. In this important work, the authors make use of the Home Ministry’s data, they track the impressive growth of student agitations after independence, which was tied to the expansion of higher education in India. The book tells us about how there was a rapid increase in the number of student led protests from 93 incidents in 1958 to 395 in 1964, jumping to 3,861 in 1970. By 1974, the number of protests had grown to 11,540. The Emergency period saw a decrease due to the repressive forces of the state, but protests again climbed to 10,600 incidents in the year 1980.

Students mobilised themselves for various reasons throughout the nation and were time and again repressed by the state-led forces. In late 1960s, students in Tamil Nadu mobilised themselves in large numbers against the nationwide imposition of Hindi. It was due to the student led resistance that despite a series of counter-protests against the Tamil Nadu students’ resistance, the Official Languages Act(Amendment) came about in 1967. This challenged the government’s forceful emphasis on Hindi and allowed the states the flexibility, while permanently establishing English, besides Hindi as India’s official language.

In 1970s we saw a rise in India’s legacy of student led movements especially due to the growing economic disparity and disillusionment among the ordinary citizens about the authoritarianism that became rampant in PM Indira Gandhi’s regime. It is impossible to neglect the very powerful and widespread Navnirman Andolan and Bihar’s JP Andolan( both these movements were known to be student movements) that subsequently also became national movements.

The Congress governed state governments were successfully brought down and Indira Gandhi’s authoritarian regime was challenged which ultimately led to her imposing the state of Emergency.

A series of Opposition parties united their efforts in fighting against the Indira regime and defeated the Congress party.

What is paradoxical is that even though the presence as well as the power of students movements has been felt time and again by the nation-state, it has continued to give it little attention and tried to underplay its historic relevance. The media too has looked at student’s resistance with inadequate interest and given far lesser attention than it really deserves.

The records of the Home Ministry refer to student protests as nothing but incidences of “indiscipline”and don’t even grant them the designation of political resistance.

Even today we see student protests being termed as isolated and discrete cases of unrest that are allegedly stroked by a jealous and a selfish political opposition. These are nothing but attempts to project student movements as nothing but immature, irrelevant and insignificant.

The fact remains that although students have raised their voice time and again against fascist regimes and questioned the establishment fearlessly, they continue to be seen as irrelevant and unimportant by both the government and the mainstream media.

Even in light of the ongoing anti-CAA and NRC protests we see how PM Modi and Union Home Minister Amit Shah have tried to trivialise student led demonstrations and tried to push them to the margins of insignificance instead of launching a series of dialogues and seriously engaging with them. They have refused to engage with them, listen to their demands or even take them seriously, what is more, their protests have been attributed to the vested interests of parties such as the Congress. The ruling regime has even alleged that the opposition has been engaged in rumour mongering and peddling lies and is using students for their vested interests against the government.

We can see a variety of authoritarian techniques such as a brutal ambush with students in Jamia Milia Islamia and Aligarh Muslim University, opening fire and the use of tear-gas shells on protesting crowds in many cities and even resorting to suspension of internet and mobile services wherever protests are breaking out.

It is sad that despite being able to mobilise and lead the resistance against the CAA, the ruling establishment has failed to acknowledge the importance and power of student resistance. What is further disheartening to see is the fact that the government does nor acknowledge the fact that students as thinking, reflexive and critical beings can have legitimate reservations about the CAA and a responsible nation-state must not refrain or be afraid of striking a legitimate dialogue with them. This is almost like failing to recognise students as legitimate citizens and crushing the democratic right of peaceful dissent under the hegemonic boots of fascism. What is also worth looking at is the fact that both PM Modi and Home Minister Amit Shah have participated and led student movements in their younger days. Prior to the 1975-1977 Emergency, the young Modi led the charge in Gujarat against Indira Gandhi’s flagship campaign “Garibi Hatao.”

He was the one who vehemently brought out the paradox of such a campaign and said that it should instead be called “Garib Hathao.” Amit Shah too began his political career as a young pracharak for the Akhil Bharatiya Vidyarthi Parishad.

It is ironic that even while both Mr. Modi and Mr. Shah were politically involved and took part in student mobilisation in their youth days, they are opting to silence and stifle the voice of students from across the nation who are raising a voice against the cruelties against Indian Muslims,Kashmiris, Assamese and other communities under the garb of CAA and NRC.

Does the systematic denial and repression of the voices of the student community by the Modi government point at its innate disability to strike a dialogue, engage in a debate or even deal with dissent ?

We find ourselves at a time when Indian students look at the future with extreme anxiety and express concern over many of the important programs introduced under the Modi regime be it the NRC-CAA agenda, the abrogation of Article 370, the construction of the controversial Ram Temple at Ayodhya etc.  A lot depends now on how the Modi-Shah alliance deals with the ongoing protests, this certainly is an important turning point in India’s political history.

The students who are putting their careers at stake for the nation’s interest show a sign of promise, not only because they strive to retain and uphold India’s constitutional ideals but also because they underline the possibility of diverse students from campuses coming together and standing together in solidarity. The coming together of students from across religious, cultural, ethnic, economic and institutional boundaries against the CAA have reminded us all what it really means to live in a democracy and what it practically means to be politically responsible and awakened citizens of a democratic and secular nation.

Ananya Pathak is the Associate Editor / The New Leam. 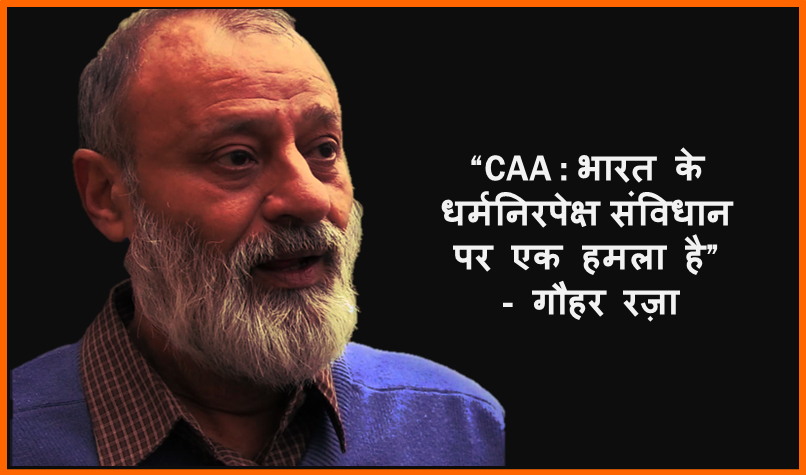 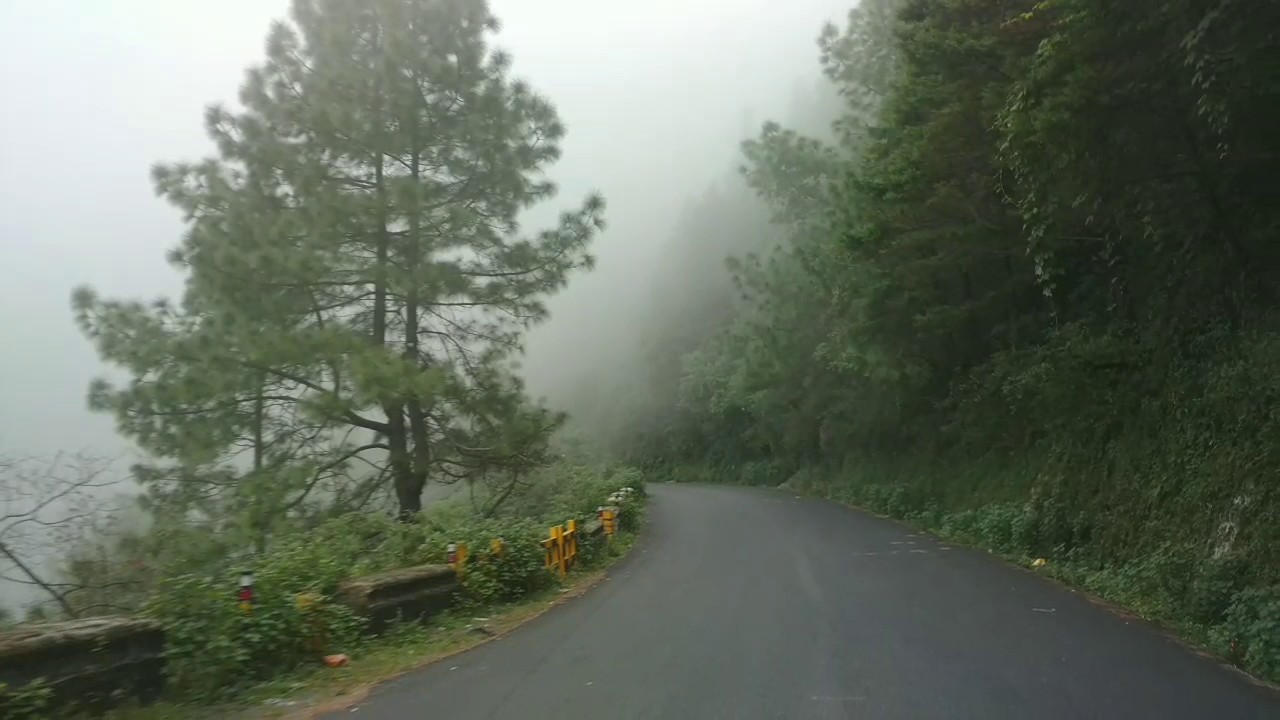 In Pictures: Does the heavy burden of ritualism enable us to have the fragrance of religiosity? 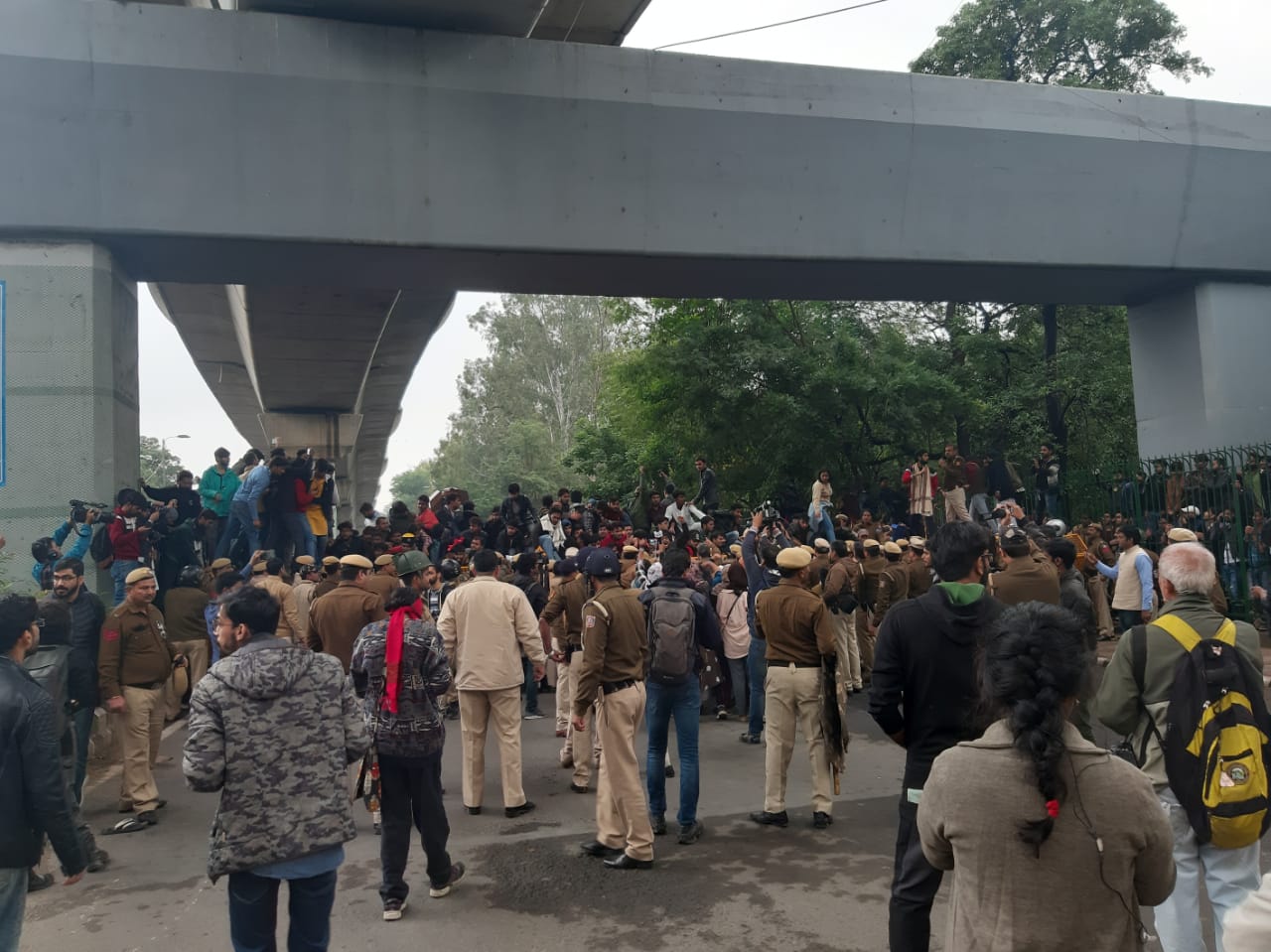 Its Time to Rise Up to the Occassion, My Dear Friends from Jamia