Home - SPOTLIGHT - Libraries in Times of Tear Gas: Why the Language of Protest is Changing
SPOTLIGHT

Many Anti-CAA protest sites across various cities are witnessing the proliferation of libraries and reading rooms. 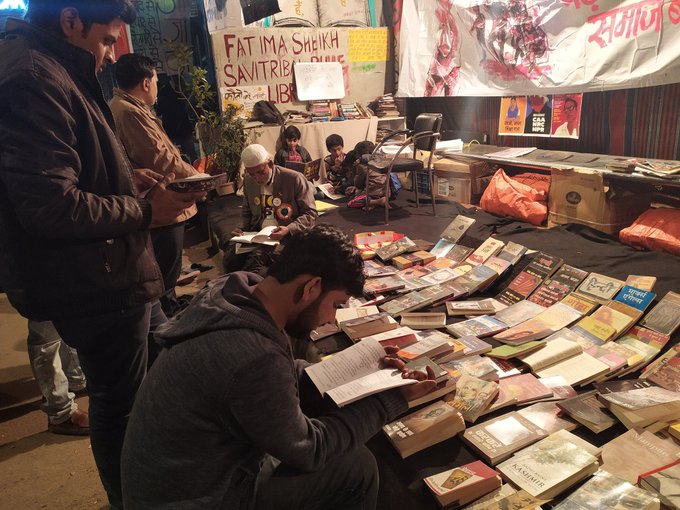 India is presently witnessing a large number of sit-in protests against the Citizenship Amendment Act. As large crowds take part in these protests and there are many amongst them who register their presence every day, we are witnessing some very creative and constructive efforts being made to deepen the cause and make the most out of the solidarity in the air.

With the growth of several sit-in protests across the length and breadth of the country, we are also seeing the coming up of small libraries/reading initiatives along with mini spaces for discussion and self-expression. Eight weeks have already passed since we first began to see a spurt in the number of anti-CAA protests in different corners of the country where protestors joined in large numbers demanding that the CAA be repealed and the NRC and NPR exercised be cancelled by the government.

While no positive response has been given by the government and there is sheer ignorance and marginalisation of those protesting, we have seen a stronger and more assertive power of the collective take the centre stage. One of the most remarkable developments that have happened in recent times in many of these protest sites is the proliferation of public libraries and reading rooms.

This trend of forming small libraries often beginning with the personal collections of the founders at protest sites has been a phenomenon across many Occupy protests globally but has been a less explored domain as far as India is concerned.

But today we are seeing how very humble, accommodative libraries are coming up in many protest sites in India too.

These libraries and reading rooms are made inside make-shift tents building on the personal book collection of those who start the initiate and then become significantly larger with the contributions of friends and readers. These libraries caught the world’s attention in 2011 during the ‘Occupy Wall Street’ protest in New York’s Zuccotti Park where a library was created in no time. Hong Kong’s pro-democracy protestors also set up a library and so did the Plaza del Sol protests in Madrid and the Gezi park protests in Turkey.

Although we saw libraries coming up at protest sites globally, we haven’t seen much of the phenomenon in India so far. But in the context of anti-CAA and anti-NRC protests in recent times across different cities in India, we are seeing the library phenomenon rising up. These libraries have come up in different cities and protest sites in Kolkata, Delhi, Araria,Kanpur etc.

The first library to have come up at anti-CAA protest site was at JMI in Delhi. The library was established on December 15,2019 and named “Read for Revolution.” It came up on a humble pavement close to the university premises and was started by two Jamia students namely Anzar Rahi and Zeeshan Ramiz. These students thought of starting a library of their own after an attack on JMI’s library injured several students and left a deep sense of trauma for many.

The police launched a crackdown on the library of the university where students had been protesting against the recently passed CAA.  Tear gas shells were used and students were beaten up, while the library property damaged. To dissent and to do something to counter the violence peacefully, these students started a library. Thus setting up a library amidst tear gas seemed like a great idea and made perfect sense. The library as a new language of resistance offers protestors a moment of contemplation and serious engagement with reaffirming ideas from around the world. In a world characterised by hopelessness, it gives people an empowerment of thought and helps them reclaim what is lost. Moreover, while the state bureaucracy and the police forces saw the library where students were studying as a problem or a threat, the idea of setting up a library as a space where more and more young people are thirsty for knowledge poses a counter narrative.

These young people choose to arm themselves with books and not guns, this is the choice that they are making. There are people who come to these libraries and spend hours looking at the books, making notes and discussing parts that they have liked with others.Scholars, activists and thinkers have come forward and informally helped these libraries by donating books from their own collections,

Arundhati Roy donated 21 of her personal books to the library. The library at Jamia has inspired the coming up of 18 more libraries in sites of protest across the length and breadth of the country.

Kolkata’s main anti-CAA protest site is at Park Circus Maidan where hundreds of women are organising a sit-in against the contentious CAA and NRC exercises. The man who came up with the idea of starting a library at Park Circus by Reya Mohammad, head of the department of journalism and mass communication at Aliah University. He started off this library with the purpose of intellectually engaging with protestors and opening up a world of exposure for them.

Out of all these libraries, the most well known library is that of Shaheen Bagh area. The Shaheen Bagh area has been witnessing a continuous sit-in by hundreds of women and children since the last two months, who have been protesting against the contentious CAA.

The Hauz Rani area is an extremely crowded one but this dingy and cramped locale could easily accommodate a library. The Gandhi Park at Shaheen Bagh has welcomed its own library and is filled with the young and the old alike.

Sundays at this library are particularly vibrant as children can be seen lounging around with their favourite books while the adults too spend a great amount of time engaging with and reading the books on display at the library. The library was started off on January 25 just three days after the sit-in began at Shaheen Bagh and is a place loved by the children and the adults alike. Volunteers at the library organise story reading and drawing sessions too for children and also help them catch up with their studies as their exams are around the corner. At Shaheen Bagh’s library it’s only the women who are allowed to borrow books and the men are allowed to use the reading room and spend as much time as they want reading the book of their choice.  There are makeshift lamps hanging for reading at night too. The Constitution of India is available in various Indian languages along with books on politics, poetry and history.

Such libraries are not just collections of books that open up the world for protestors(many of whom would otherwise find it difficult to have access to/afford them)but seeds of hope in difficult times. They are important because they install our faith in human creativity and positivity and remind us that equipping ourselves with books is a far more brave decision that equipping ourselves with guns!