After PM Modi, south superstar Rajnikanth is soon to make an appearance on popular Discovery show ‘Man vs Wild’. 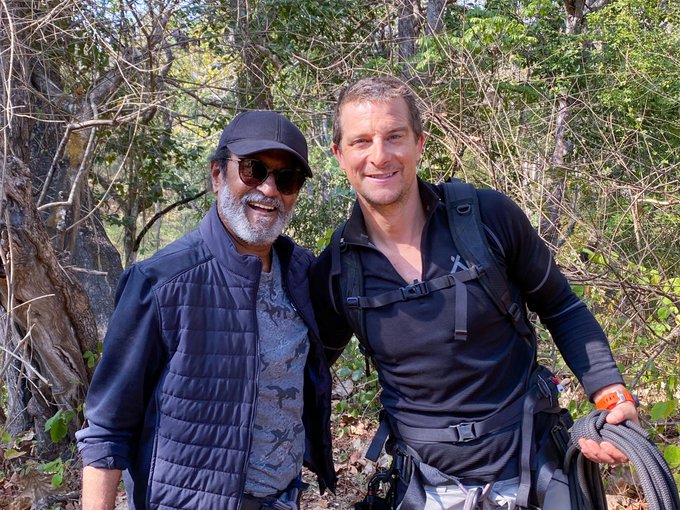 Bear Grylls has shot with superstar Rajnikanth at the Bandipur National Park in Karnataka. Image:Social Media

The appearance of Prime Minister Narendra Modi on the famous television show Man vs Wild on Discovery was surely appreciated by a large chunk of the audience.

Thus in keeping with the strategy of calling more influential Indians on the show, this time its loved host Bear Grylls will be seen in a fresh new episode with cinema superstar Rajnikanth.

The show makers are surely aware of the fact that Indians are very keen as an audience to welcome and see celebrities and politicians and thus fresh reports also tell us that even film actor Akshay Kumar had been invited and filmed for the show with Bear Grylls.

In addition, the 14 part series will also feature Deepika Padukone and Virat Kohli. While Prime Minister Narendra Modi’s show was aired on August 12, 2019, it is known to have gained the highest viewership in the infotainment genre during the prime time slot according to the Discovery channel.

It would not be incorrect to say that the episode with PM Narendra Modi proved beneficial not only for the Discovery channel but also for the entire genre of infotainment. This is because, according to the data for the episode Man vs Wild resulted in viewers across the world spending an average 29 minutes and the Discovery network as a whole saw 15.6 million tune-ins.

Many experts said that while it was true that the episode with PM Narenrda Modi had proved beneficial for the channel, the channel had the challenge of keeping up the heightened viewership and popularity.

The Southern superstar is all geared up to make his debut with Discovery channel’s popular show with Bear Grylls.

Grylls tweeted, “ After our episode with Prime Minister Narendra Modi of India helped create a bit of TV hist0ry,(3.6 billion impressions), superstar Rajinikanth joins me next, as he makes his TV debut on our new show.” Meanwhile the host Bear Grylls and superstar Rajnikanth have wrapped up the shooting of the show at the Bandipur National Park.

The superstar also thanked Bear Grylls for having invited him to the show. The audience seems to be excited and looking forward to the show. While it is true that there is much hype about the upcoming episode, environmentalists and conservationists are quite unhappy with the makers of the show. Bandipur is a popular tourist destination but there are certain areas in the forest that are completely off-limits and people are only allowed to visit them so that wildlife is not disturbed. The environmentalists and conservationists felt that by shooting in these sensitive areas of the forest, they were threatening it to wildfires and disturbance to the local wildlife. However, the state government had denied all such claims. The forest area where Bandipur lies is part of the Nilgiri Biosphere Reserve, which boasts of the largest tiger population in India.  Man vs Wild  made its debut on Discovery Channel in 2006. The show is about how the host bear Grylls and the guests who appear on the show overcome extreme challenges in the wild, like dealing with hunger by eating insects etc.

The show had become particularly popular in India last year as PM Narendra Modi was invited to be part of the show. While the Karnataka government is being condemned by environmentalists for allowing for shooting in the alleged sensitive parts of the forest, they continue to assert that all due permissions were taken and all allegations and charges were false.

However, those opposing the act say that animals were disturbed and the shooting made the forest vulnerable to forest fires. They also condemned the government’s double standards and said that while it was asking local tribals to clear the forest land and look for other places of habitation to conserve the tigers, it had been giving away the privacy of the forest for entertainment purposes.

They said that even if permission were to be granted it should have been given for shooting in the tourist zone and not in the inviolate space.

Most organisations working on wildlife in Karnataka are writing to the authorities and seeking an answer.

Amidst all the controversy around the shooting and the encroachment of the forest area, the upcoming episode of Man vs Wild is being eagerly waited for by many Rajnikanth fans. But can we really neglect the environmental questions?